Regan Lu Shieh was born in Hawaii, grew up in Michigan, and now resides in Taiwan. He expressed an interest in writing at an early age penning his first poem while still in elementary school. Regan’s uncle even put the poem on his Wish Pearl Jewelry. Regan went to Taiwan after elementary school and then migrated back to Hawaii in the 8th grade. Regan began conceptualizing Dark Ones (his novel available on Amazon.com) while he was in high school at the Taipei American School. Regan relocated back to Michigan to finish high school education at Wasthenaw Technical Middle College and then went on to attend Eastern Michigan University. It was at EMU where he was exposed to Capoeira an African-Brazilian martial art created by enslaved Africans in Brazil. Regan moved back to Hawaii to attend school and train Capoeira with the famous group Capoeira Senzala. Currently, Regan resides in Taiwan, continues Capoeira training with the group Luanda, and is working with WOW Productions out of Singapore to turn Dark Ones into a movie.

Q: Regan, where are you from?

A: My family is from Taiwan, but I was born in Hawaii and grew up in Michigan. I consider myself more American than Taiwanese, and that’s why all my writing is in English. I only got my Taiwanese citizenship 4-5 years ago.

Q: What led you to write Dark Ones?

A: I started in high school with the dream of my story eventually becoming a book, graphic novel, and movie. It draws influence from Taipei city, Waikiki, Hawaii in my young adult life, my own life in general, and movies like Star Wars, The Matrix, and Blade. The novel is already a popular book on the Internet, and I have about 50 pages done with the graphic novel but have yet to find some way to transfer it to file and have somebody edit the files. As for the movie, Wow Productions based in Singapore has already shown interest making Dark Ones into a movie!

Q: What experience have you gained from writing this book?

A: I have gained a lot of writing experience from writing this book, obviously. However, on the same note, that doesn’t mean I will just continue writing—it means, from feedback, I have learned how to become a better writer. As awkward as it may seem, it has also driven me to become a better comic book artist and I have gotten to know some people in the film industry.

Q: Dark Ones features some martial arts action, do you have a background in martial arts? If so, what styles have you studied?

A: Yes, a good action novel would be a foolish thing to write without any martial arts background. When I was little and still in the States for Chinese school, we practiced Kung-fu. I remember having to squat in the horse stance for 5 minutes as a kid. In the same Chinese school, my mom was able to convince our former next door neighbor and his son, both a sensei and the son is now a black belt, to teach us Judo. Some of the techniques he taught us, I would have to use in real life later. When I was in junior school here, Kung-fu was taught in P.E. class. As I just mentioned, I took Judo from our former next door neighbors in Chinese school back in Michigan. One time, probably due to stress and suspicion, my dad commanded us kids to call my mom and tell us to have her come home immediately, or else he would kill all of us then himself. He dragged my youngest brother, Robin, who was only 5 at the time, into the kitchen and pulled a butcher’s knife on him. I, being the oldest and having to take on responsibility, used a wrist-lock motion that I had learned in Judo to extricate the knife, and then I kept beating him up until my mom finally came back and stopped the fight. My next, and am still training in, martial art is the combat dance Capoeira. I will forever stick to Capoeira because it is not purely a martial art, but a dance, too, and I love to dance. I used to be a B-boy (breakdancer) in Hawaii, and even made US$80 one night from street-performing. ( https://www.youtube.com/watch?v=JLKd161or7M )  As of now, 2015, I have been studying Capoeira for about 12-13 years, participating in Capoeira activities whenever and wherever I can. (https://www.youtube.com/watch?v=fRDseizmALM ) I have also dabbled in Muay Thai and Naginata-do. I truly admire the samurai spirit, so I am practicing Kenjutsu now, too, and a sword smith here in Taiwan is going to help me make my own katana samurai sword. (https://www.youtube.com/watch?v=rnKdv6WBQw8 ) ( https://www.youtube.com/watch?v=ciurhhw3gyI ) Not that I want to, but I have also used my martial arts training in real fights before, usually with negative consequences, but occasionally successful.

Q: Regina is an interesting character; can you give us any more insight into her journey?

A: Regina, in my book Dark Ones, is basically an alter-ego of myself because I wanted to write a female heroine. I, too, have gone from student, have been homeless before, gotten mixed up with gangsters (though not as serious as Regina) and although not become a Dark One, because they are just fictional characters, but have also been sort of a vigilante: I used to patrol the streets of Waikiki, Honolulu, Hawaii to the point that the police (probably jokingly) swore me in as an “undercover” agent; I have also been a voluntary bouncer before; I have kicked a drunk out of a local park here in Taiwan by simply demonstrating, but not using, Capoeira; also, I was a voluntary security officer in a club-infested area here in Taiwan, similar to the opening scene of Dark Ones, even though Waikiki would be an even more similar reference.

Q: Are there any future plans for Dark Ones?

A: The ending of Dark Ones may seem like a tragedy to most people, but for all you Dark Ones fans out there, I am writing a sequel. The comic book, slowly but surely should be coming along, too. However, the most exciting news is that Dark Ones may really become a movie, as mentioned, with shooting starting late 2016 to early 2017!

Q: At the moment, who is attached to the Dark Ones movie?

A: Jay Lim, Executive Producer of Wow Productions, showed interest in my story when I started posting advertisement for the Dark Ones book-to-movie project. I also got an amazing amount of people interested in working on the project, but due to many reasons, such as time, location, budget and otherwise, of course I could not include everyone. I am going to most likely stick with Jay Lim because he is basically the only person who has given me an offer.

Q: Dark Ones was such a good read, do you have any other publications available or in the works?

A: Yes, if you look up my full name, “Regan Lu Shieh”, on Amazon, you will find many of my works. You may read most of them if you have Kindle, but Dark Ones and 99 Angels of Hope are tangible books, too. The rest are just short E-books that I have written before and transliterated into E-book format. Since I am also a rapper ( www.soundcloud.com/regan-lu-shieh ), a lot of them are just rhyming stories or poetry. Fish Chat is a short rhyming children’s book, Blasian is a short rhyming story, too, about a culturally Black and Asian Hip-hop star, 99 Angels of Hope is a collection of 100 short “We wish for…” rhyming poems with splendid black and white illustrations done by my Aunt Flora, a Capoeira Story is a narrative based on my own basketball-to-Capoeira experiences, Lost World? is a science fiction short story, Journal with Quotes is a witty E-book of myself arguing against proverbs, and, of course, there’s Dark Ones, which if all goes well, is going to be made into a movie!

Q: When can we expect to see the trailer for Dark Ones?

A: Originally, a team and I were going to film a trailer at the end of January, beginning of February—that weekend, but due to budget problems and organization, I have called it off. I guess fans will just have to wait until Wow Productions begin releasing its own professional trailer(s) in 2016/2017.

Q: Regan thanks for taking the time to talk with us. Any words you want to leave with our readers?

A: All I would like to mention to you readers of this is thank you for your time, and I hope you buy my book, watch the movie, and perhaps read the comic book when the latter two come out:

May Energy be unto you! 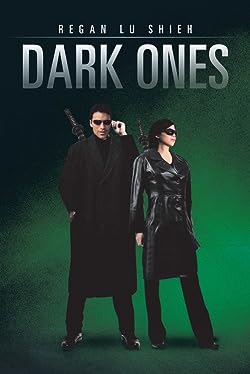