“Tell me Monk, how did you manage to kill Lord Tang?”- Lord Cheng

The Manchus have taken over China and installed the dreaded Ching Dynasty. Young ethics student Liu Yu Ter ( Gordon Liu) is swept up in the anti-Ching rebel activities along with two of his classmates and his teacher. After General Yin ( Liu Chia Yung) fails to assasinate  the infamous and cruel Manchu General Tien Ta ( Lo Lieh) the Manchus  tighten their evil grip on the town by torturing and killing  people suspected of being rebels. After Liu’s family is killed he and another student set out to learn kung fu from Shaolin Temple. They are tracked down and confronted by the sadistic Lord Tang ( Wilson Tong) who kills Yu Ter’s friend and badly wounds Yu Ter’s leg. Yu Ter manages to escape and finally makes it to Shaolin Temple. The abbot of Shaolin takes pity on him and accepts him as a monk. After a year of just sweeping and cleaning, San Ter ( Liu Yu Ter’s Buddhist name) inquires about martial arts training. He expresses his desire to learn kung fu to stop the Manchus bullying of the common folk. San Ter is told that Shaolin has 35 Chamber teaching various martial arts and he may choose to learn from the first 34 as the 35th is much too advanced. San Ter tries to start at the 35th Chamber and is confused by the seemingly weird Buddhist sutra chanting and mystical practice. He then seeks to start at the lower chambers that consist of balance training, forearm/wrist training, eye training, shoulder training, boxing, kicking, staff, and broadsword training.

San Ter completes his training in record time and is continually praised by the Abbot of Shaolin.  Senior Monk (Lee Hoi San) challenges San Ter to beat him in a sparring session using weapons. When San Ter is defeated three times he creates the three section staff to defeat Senior Monk and is allowed to take charge of any one of the 34 Chambers ( he still is not advanced enough for the 35th). San Ter asks the Abbot permission to start a new Chamber to teach civilians Shaolin skills in order to fight the Manchus. The Abbot explains that Shaolin doesn’t get involved in worldly affairs and expels him from the Temple. San Ter returns home to visit his father’s grave and discovers Lord Tang and his men fighting some rebels. San Ter decisively defeats Lord Tang, which allows Hung Shi Kwan (Yang Yu) to kill Tang. Hung begs San Ter to be his teacher, San Ter accepts, but asks Shi Kwan if he knows of any other young men willing to fight the Manchus. San Ter is introduced to Tung Chen Chien ( Wu Hang Sheng), Lu Ah Cai ( Norman Chu), and Miller Six ( Wong Yue).  San Ter also encounters and kills Manchu General Lord Cheng and devises a plot to kill General Tien Ta. San Ter utilizes his plan, isolates Tien Ta, and kills him using his Shaolin skills. Monk San Ter then goes back to Shaolin and establishes the 36th Chamber to train civilians in the martial arts of Shaolin.

Kung Fu Heaven!!! 36th Chamber of Shaolin contains some of the greatest training footage ever produced in a kung fu film ( or any film)! Director and choreographer Liu Chia Liang created dynamic and progressive training sets ( the Chambers) that showed the plight from novice to expert. Gordon Liu’s facial expressions showed frustration, fatigue, wonderment, and finally joy as he progressed through his martial studies. As Gordon transformed into Monk San Ter the choreography got subtlety more complex and involved resulting in some great fight scenes and arduous training sequences. The fights  between San Ter and the Manchus Lords Tang and Cheng were magnificent. It seemed as if San Ter managed them with ease showing off how the results of his rigorous Shaolin preparation. Even Manchu General Tien Ta was dispatched by San Ter’s Iron Head technique after taking a beating from the three section staff! Fight Master Liu Chia Liang shines here as does Gordon Liu, Lo Lieh, Wilson Tong, and John Cheung.

If you haven’t seen this movie what are you waiting for?! I think this is one of the most influential kung fu movies of all time. 36th Chamber of Shaolin has inspired thousands ( if not millions) of people to seek out traditional martial arts, glorified the hard work that goes along with developing skill in kung fu ( and other endeavors), helped in the development of the hip hop group Wu Tang Clan, and pioneered a sub genre ( I like to call it the “training film”) that has been imitated by Jackie Chan, Sammo Hung, and countless other kung fu directors, studios, and stars. If you haven’t already add this to your collection. You will not be disappointed!!!! 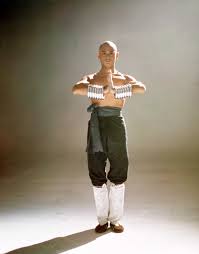