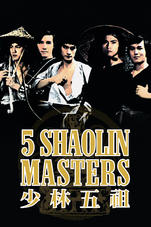 Plot: Hui Te Ti ( David Chiang), Tsai Te Chung (Ti Lung), Ma Chao Hsing( Fu Sheng), Feng Ta Tung (Meng Fei), and Li Shih Kai (Chi Kuan Chun) survive the burning of the Shaolin Temple by the Manchurians. They split up and agree to meet later so each can gather support for their cause (restore the Ming dynasty). They are pursued by the ruthless Manchurian General Chen Wen Yao (Chiang Tao), Chang Chin Chiu ( Fung Hak On), Chien San ( Leung Kar Yan), Flying Axe Pao Yu Lung ( Tsai Hung), and the Shaolin traitor Ma Fu Yi ( Wang Lung Wei) who seek to destroy them once and for all. The five Shaolin disciples realize their kung fu isn’t strong enough so they gather together to train and each tasks themselves with fighting one of the Manchu warriors. To aid them, Hu Te Ti enlists the aid of a local pro-Ming warlord Kao Fung (Li Chien Pao) and his troops as well as others pro-Ming patriots. The Five Shaolin Masters face their Manchurian foes in a battle of rebellion revenge for Shaolin, and pro- Han Chinese patriotism.

The action in Five Shaolin Masters is reminiscent of other Chang Cheh-Lar Kar Leung collaboration of this time period ( early 1970’s to 1975). The action is less stylized than in later Lar Kar Leung directed movies ( see 36th Chamber or Heroes of the East) and is more brutal and less artsy. This is not to say the fight scenes aren’t good; they are just more old school brutal screen fu. Kar Wing and Kar Leung do a good job in contrasting the style of each hero vs each villain: Tsai Te Chung ( Ti Lung) uses the long pole to fight against Pao Yu Lung’s Flying Axe, Li Shih Kai has to master the Cross Fist style to match up against Chang Chin Chiu, Hu Te Ti’s iron whip vs Chen Wen Yao’s queue, Feng Ta Tung masters the rolling technique to fight Chien San, and Ma Fu Yi must master tiger-crane style to defeat Ma Fu Yi’s plum blossom style. These style vs style match ups make up for what the movie lack in more stylized choreography. It also drives the story be telling(and showing) the viewer why these match ups matter and why the Five Shaolin disciples were defeated in earlier combat in the movie.

Five Shaolin Masters is one of the best of Chang Cheh’s “Shaolin cylce” of movies. It has star power both behind and in front of the camera, brutal fight scenes, the style vs style match ups, some comedy ( Fu Sheng as the slightly forgetful  and silly Ma Chao Hsing), heroic brotherhood and two sets of Chang’s favorite duos of that time period ( David Chiang and Ti Lung, Fu sheng and Chi Kuan Chun). The Shaolin vs Manchu theme is in full force as well as great character development from the main stars and other characters;  for example the Five Shaolin disciples are at first mocked by other pro-Ming supporters until the Shaolin students show their valor and bravery then they are respected and looked to as leaders. The Manchus are wicked in the movie and don’t fight to injure but to kill! Put all that together with Chang Cheh directing , Lau Kar Wing and Lau Kar Leung choreographing the fights, and you’ve got classic kung fu. Five Shaolin Masters is a must have for Chang Cheh fans and classic kung fu movie lovers.