In part 1 and part 2 of Dojo Tribute: Black Tournament Fighters, I mainly covered African-American martial artists that competed in the 1960’s and 1970’s. These men pioneered uncharted ground for black tournament competitors and they paved the way for later generations of black Karate tournament fighters to be respected, keep competing and training in martial arts. Back when I really started to get interested in the martial arts  (somewhat independent of the movies) I would spend hours in my local drug store (yes we used to call them that) reading through magazines like Inside Karate, Inside Kung fu, Martial arts Illustrated and others. Some of the point fighters I am going to talk a little about come from this era ( the mid 1980’s) and I always looked forward to seeing issues with some information on them. I remember terms such as “Sport Karate” and “Point Karate”  was always used when referring to the type of sparring they did. It was an exciting time for me to read about these Sport Karate/Point Karate fighters. Let’s take a look at some of them in this Dojo Tribute part 3: black tournament fighters of the 1980’s. As always this is not meant to be a comprehensive list but a starting point for conversations. What does this have to do with martial arts movies? Well some of these competitors became featured in martial arts movies or had cameos in some. Enjoy 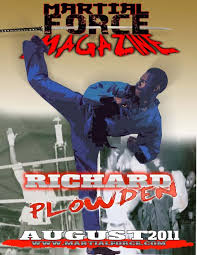 Richard Plowden began his martial arts career in 1973 studying Taekwondo. He is a 6th degree Black Belt, and a muti-time world champion. He won NASKA grand championships as well as a World Karate Organization (WKO) title in Germany, was member of Budweiser National Karate team, and is another legend in the world of Sport Karate. Sensei Plowden has been teaching in the Detroit area since 1988 and his students still use his expert teaching and coaching to amass Sport Karate championships of their own. For more info on Master Richard Plowden check out this cool interview.

Before Billy Blanks became known for Tae-Bo, he was a fierce Sport Karate fighter competing on the national circuit. His rivalry with Steve “Nasty” Anderson was featured in many issues of Inside Karate, Black Belt, and Inside Kung fu in the mid to late 80’s. He was known for his incredible physique, kicking power, and his never say die spirit. Master Blanks is an 8th degree black belt in Tae Kwon Do and has studied five other martial arts disciplines. He has starred in movies such as Showdown, Talons of the Eagle, King of the Kickboxers, Bloodfist, Lionheart, and Balance of Power. For more information on Master Blanks work and history click here.

Known as a hard hitter and tough competitor Grandmaster Linda Denley is a legend in the Sport Karate world. She is an 8th degree Black Belt in the art of Tang Soo Do and a 4th degree black belt in Taekwondo and is known as one of the best at kumite (sparring) and was ranked number one from 1973 to 1996. She was also a Olympic level track and field competitor but had to decline due to her winnings in the pro Karate world. Grandmaster Denley was known as the “Texas Terror” and is one of the most decorated sport Karateka in the world. She continues to teach at her school The Texas Black Belt Academy where her work with the youth help spread the values of traditional martial arts: respect, inner strength, pride in one’s self and work, and good sportsmanship. To list here accomplishments would take up the whole page, so visit here for more detailed information and here for the information about Grandmaster Denley’s Texas Black Belt Academy.