Forms practice (known as Kata in Japanese Martial Arts, Hyung or Poomse in Korean Martial Arts and Kuen in Chinese Martial Arts) have always been an integral practice to strengthen technique as well as the body and the mind. The forms or kata category was is also a division in   martial arts tournaments and competitions. In martial arts films, forms have been used to establish a character’s technical precision and showcase the character’s skill. At times, forms can also be a very beautiful display of skill, technique, and power (whether internal or external).

In our continuation of Film Fan Dojo’s Black History month tributes we come to the realm of black martial artists who are some of the best technicians both on and off screen. These artists definitely put the “art” into martial arts and are some of the best at performing their forms. Sit back and enjoy a Dojo Tribute to African American forms players. As the famous MC Rakim would say “Don’t Sweat the Technique.” 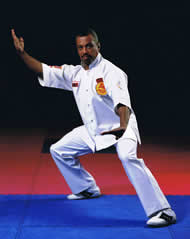 Grandmaster Brown is another pioneer. He has been studying Tien Shan Pai Kung Fu for over 40 years, is a successful martial arts school owner, puts on the excellent Capitol Classics Tournament, and  became the first African American to study Wu Shu in mainland China (the early 1980’s). He has won numerous forms championships in staff and sword forms. He is also famous for his ability with the very difficult weapon: the rope dart. Read more about Grnadmaster Brown’s lineage and history here.

Sifu Hamby, one of the subjects of the PBS documentary The Black Kung Fu Experience, is a Hung Gar Kung Fu master and one of the foremost authorities on the art. He is a disciple of Master Buck Sam Kong and has also received instruction from the famous Hung Gar Grandmaster Lam Chun Fai (a grand student of Lam Sai Wing). Sifu Donald has appeared on Steve Harvey’s Big Time show, appeared in an episode of Kwoon, and has even had his own talk show dealing with Kung Fu, as well as instructional DVD’s. Sifu Hamby currently teaches in Sherman Oaks, CA. Visit Sifu Hamby’s website for more info.

Master Johnson has a very impressive resume: he has studied kung fu, karate, boxing, jiujitsu, tai chi, and has been ranked in the top of the forms division. He was a triple crown winner in 1991 and holds the honor of being the first African-American to be ranked number 1 in forms and weapons. “The Bam” has appeared on WMAC Masters, Wesley Snipes’ Masters of the Martial Arts, has appeared in Super Fights, and Major League II, and is a graduate of the prestigious Beijing Physical Culture Institute. He uses his fame and skills to teach kids the value inherent in martial arts and is the spokesperson and founder of the Stronger Than Drugs foundation. Check out “The Bam’s” website!