Welcome to a new feature at the Film Fan Dojo! Indie Showcase will be dedicated to independently made short films, web series, and fight scenes. We at the Film Fan Dojo believe it is important to support indie filmmakers, actors, writers, and others who use their creativity to produce exciting content. Some of the most creative pieces of entertainment, especially action, martial arts, and sci-fi are coming out of the independent scene. We want to examine and expose this work to our readers because we believe it is necessary to push the martial arts genre forward especially the filmmakers who use the Old School classic kung fu era as inspiration, whether in story, fight scenes ( and if we get lucky) or both. Let’s take a look at our first Indie Showcase! 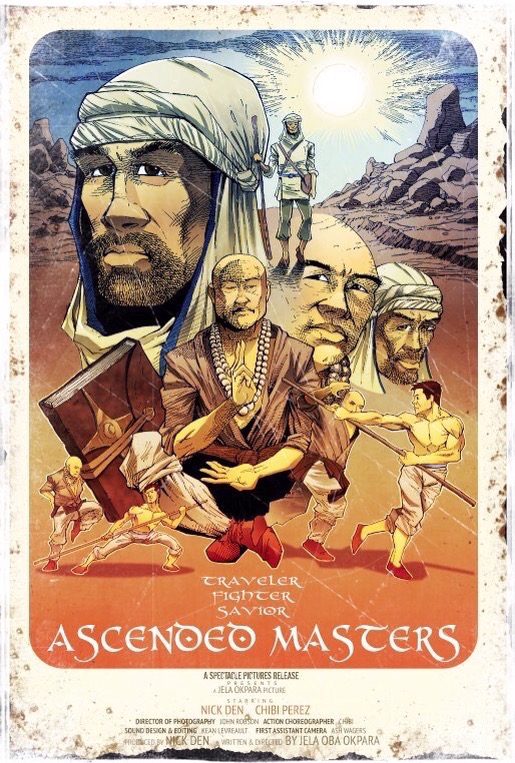 Writer and Director Jela Oba Okpara brings us the first in a promising web series Ascended Masters. Ascended Masters tracks the life of Yeshua Bin Yusef (Nick Den) and his travels between the ages of 12 and 30. In this webisode Yeshua meets Siddhartha Guatama (Chibi Perez) and begins training to embark on his journey to self-enlightenment and teaching. Ascended Masters is an ambitious project and judging by this episode it’s going to be good!

Fight choreographer Chibi fuses old school  style fight choreography with a modern Wu Shu feel. The intricate hand and leg work coupled with the music, sound effects, and fight tempo remind me of a good Saturday morning Shaw Brothers flick. The staff vs empty hand fight between Yeshua and Siddhartha is one of the best in terms of capturing the old school flavor while still bringing a freshness to the fight. The end sequence credits are a wonderful homage to the Shaw Brothers and Golden Harvest classical kung fu films from the 1970’s and 1980’s. This is a feature I hope the director decides to keep and include with every webisode.

Ascended Masters is a good beginning to what seems to be a great web-series that you should check out. Not only is the fighting good, but the message is as well. I am looking forward to seeing episode 2 to see where Yeshua goes next and whom he trains with as well as the lessons he will learn. If you want more information about the series check out Jela Oba Okpara’s blog.

P.S. If you are an Indie action filmmaker and would like your short film or web-series reviewed by Film Fan Dojo please contact us at goldenarmkid73@gmail.com